The recently concluded 28th Singapore International Film Festival (SGIFF) celebrated and inspired independent cinema. With more than 14,000 festival goers from Singapore and across the region drawn to its film screenings, panel discussions, talks and masterclasses, this event was a treat to cine lovers.

India Se Media had the opportunity to meet and interview not just stalwarts of the business like Oscar-nominated director Shekhar Kapur and veteran actress Waheeda Rehma as well as new directors like Anup Singh and Japan’s Atsuko Hirayanagi. These interviewees gave us a ringside view of the industry while also taking up issues such as nepotism and Harvey Weinstein. 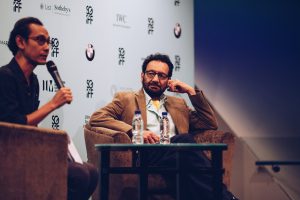 India Se: How was your experience at the SGIFF?

Shekhar Kapur: I thought it was amazing, given the fact that Singapore is not a big market, but the SGIFF is getting bigger and attracting a lot of attention. Every festival is competing with each other, but being the chairman of the jury, I watched all, I was surprised by the quality of the films – two things surprised me, A) Though there were so many Asian films – Thai, Korean, Israeli and Iranian – they were culturally so different and so good. B) The films were by first-time directors, so I felt that Asian cinema is in a really good place.

India Se: What do you think of Asia as a film market?

Shekhar Kapur: The Asian film market is bigger than the West – if you take India and China into account. Given the size, I assume that Hollywood too will start making films for this market. The international market is 70 per cent of the total market, so Hollywood is just 30 per cent.

India Se: But big studios did not do well in India?

Shekhar Kapur: That’s because they do not understand the market. They need to understand the culture there. Asia is different, it is in flux,  we are growing economies, all the structures are changing, therefore the stories that are coming out are very real. They are about change, whereas the western civilisation is plateauing, so they do not have as many stories to tell as we have in Asia.

The Indian movie industry is changing. Dangal has made $300 million worldwide, it has made more money outside India than it did in India. And as filmmakers respond to the fact that their films are accepted internationally, the films will change and new filmmakers will come up. But it is true that every studio that has come to India has tried to capture the Indian market not realising that the Indian market wants to go global. There is a conflict that they don’t quite understand.

India Se: You were technically an outsider to Bollywood, though Chetan Anand and Dev Anand were your uncles, your father wanted no association with it. What is your view on nepotism?

Shekhar Kapur: I have technically rebelled against everything in life. I am a natural born rebel. I was never an insider in Hollywood, European cinema or Bollywood… but that’s just me. But if you see Hollywood, it’s as nepotistic as any other industry.

India Se: What do you have to say about this whole Weinstein issue?

Shekhar Kapur: It’s a serious issue, it has to be addressed. I have worked with Harvey Weinstein, I know what happens, it’s no secret. People who surround him, his company, all of Hollywood would snigger and laugh “Ah oh Harvey’s up to it again.” But that’s in the West. In India it’s a little different because women are seen as property and that has to change… actresses are objectified. As long as women are objectified in films, the only reason for them to be there is to look sexy. The women themselves in films have to say ‘NO, that’s not what we are here for.  We are not here to show our bodies, we are here to do serious work.’ Harvey Weinstein would never have hit on Cate Blanchett because he knows that she cannot be objectified. So in Hollywood too, being a bad boy is like a badge of honour. It has to stop.

India Se: Coming to your own work, you’ve had some very strong women characters. Were you influenced by strong women in your life?

Shekhar Kapur: I think so. I find strong women more interesting than strong men. Strong men (as a genre) can fist their way out, but not strong women. They have to do much more than men, to come out on the top and win. Therefore, you get to examine a lot more about human nature.

India Se: What is your next big project?

Shekhar Kapur: I still want to do Paani, with Yash Raj.

India Se: Why did you decide to do this movie after being away for so many years?

Waheeda Rehman: An artist does not retire, he or she may slow down or get selective based on priorities. But when you get a good project, you take it up.

I met Anup through a common friend, Munnir Kabir, who wrote In Conversation With Waheeda, she asked me to see his previous movie, Qissa, which I loved. So when he approached me, I readily agreed.

India Se: Are you a trained singer?

Waheeda Rehman: I always wanted to learn singing. I had an Ustad for some time, but stopped after a while. So when the role came and the grandma had to heal through singing, I asked Anup if I could sing, and he agreed. Then I thought to myself, ‘What have I gone and done?’ But he and the music director helped me.

India Se: Why did you choose to go as a Swiss collaboration? Your earlier film was a German collaboration. Is it easier to raise money that way for a film that’s perhaps not mainstream?

Anup Singh: I don’t live in India. I have lived in Europe for more than half my life, so it makes sense for me to work with European producers. Indian producers have certain ideas about how films should be made. With Qissa, I spent almost 12 years finding a producer in India. I had people tell me don’t make it in Punjabi, make it in Hindi, we will tell you who you should cast, those kind of things. The same thing happened with The Song Of The Scorpions. So I realised, if I were to work with Indian producers that I had met, I would not have the freedom to make the film I had envisioned. So when I spoke to European producers, they told me that they could make the film independently of Indian producers. But things are changing in India. There are some young producers who have the courage to support such films.

India Se: What do you think of this new breed of NRI filmmakers – like yourself and Ritesh Batra? What value do you bring to the Indian movie space?

India Se: Would you ever consider making a movie with a Khan or a Kumar?

Anup Singh: The Bollywood form is a magnificent form. Some of the great movies in Indian history are made in that form. It is a form that is extremely pliable. Look at Guru Dutt, Goldie Anand or Bimal Roy. There are great filmmakers and I would be happy to make a Bollywood film freely, if I am allowed to use the form in my way and maybe that will happen.

Waheeda Rahman: I was very lucky to work with them. When they made a movie, they did not manipulate or calculate, if I spent so much, how much would I make. They did not look for that. They could do it with total madness.

India Se: How easy is it to break into movies, especially in India?

Anup Singh: Impossible. Mainstream filmmakers speak to me wonderfully, but they do not trust me and I don’t blame them. They have not seen me, they don’t know who I am and don’t know what I will do. And I really can’t say they are wrong in their judgment. There are others, the younger ones who come to me and say they want to do the next film, but for me it’s a joy… but I look forward to the day when the older mainstream producers will come to me and say that they will do a film with me.

India Se: You have a Japanese cast and Josh Hartnett, an American actor. How was it for you to work with each other?

Atsuko Hirayanagi: Josh is very open and very nice, easy to work with. The difference is that he is very used to the Hollywood way of shooting the film, which is a lot of coverage. It means that you shoot the same scene from different angles. So he is used to warming up as he does many takes. whereas these actresses are used to doing one or two takes, so basically they are ready go.

It was challenge to do the same thing over and over again. So I decided to shoot them first to let them warm up.

India Se: How did you ladies feel working with such a handsome actor?

Shinobu Terajima: He wasn’t like a Hollywood star, he tried hard to blend into the Japanese milieu, nice guy.

Shiori Kutsuna: He was amazing, I felt lucky to be part of the film.

Shinobu Terajima: Would I have to dance and sing?

Shiori Kutsuna: I would like to act and sing.. it would be so much fun

India Se: The movie received buzz. Is there going to be a mainstream release?

Yukie Kito: It will be distributed in France first, the US in spring and Japan after that. Singapore too.

Nithya Subramanian has worked with India Se since its launch in 2007. She currently manages the editorial content of the publication as well as the digital media platforms. Her responsibilities include planning, assigning and overseeing production of the content that goes into the different media platforms. Nithya has over 18 years of experience in print journalism having worked in several leading publications such as the Hindu Business Line, The Telegraph and A&M magazine. She has covered a wide range of sectors such as banking & finance, health, media & advertising, which enables her to bring in a lot of value in the editorials of India Se. She has been living in Singapore for the last 12 years and has two children Sriya (11) and Kritin (8).

Heart of Darkness lights up the pub scene

Deepavali 2022 Light Up by LISHA

My Community Festival presents trails and tales throughout August

Out of the darkness and into a Spark of Light

The best of both worlds

A Big Show From A Small Island